The biggest mapping fun at Christmas time isNORAD's Santa tracking.  The tracking started back in 1955 when a Sears department store misprinted the number children could call to get updates on Santa's whereabouts.  The number instead went through to the Colorado Springs' Continental Air Defense Command (CONAD) Center.  The then Director of Operations at the time, Colonel Harry Shoup, instructed his staff to provide radar based updates to those calling in about Santa locations.  The tradition of providing updates continues to this day.  The application uses GIS technology to track Santa starting on December 24th. Using NORAD's radar system called the North Warning System, visitors can log on to the website to track Santa's movements as he leaves the North Pole. Santa tracking can be done in English, Spanish, French, Italian, German and Japanese.  The site offers a mobile app to also track Santa with Google Maps for mobile.
Santa Against Zombies Map

For some quirky GIS analysis relating to Christmas, the floatingsheep blog (the same researchers that created the popular Zombie Google searches map) looked at tagger Flickr photos and geotagged Google Maps annotations to compare the prevalence of theword "Santa" against the word "Zombie" to see which word dominates geographically.  Mapped out onto a gridded system, the map mostly shows a preference for "Santa" as denoted by the green dots:

[T]he map below clearly shows that while most of the country is all keen about Santa, a few pockets including just outside the San Francisco Bay and Seattle and the cities Houston, Dallas and Austin in Texas have a lot of zombie angst. 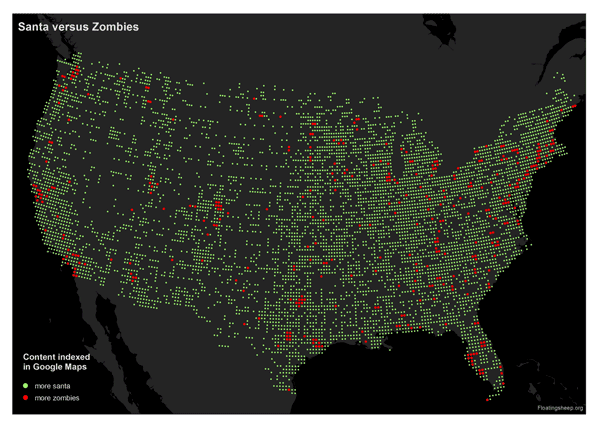 Map of Santa Versus Zombie Preference.

A post from the "Parallel Divergence" blog from December 22, 2006 entitled "How Google Earth Killed Santa" discusses the potential harm that being able to see the reality of the world's geography does to children's beliefs in santa Claus.

So what's the probability of a white Christmas?  This map (created back in 2001) from NOAA maps out the likelihood of areas around the United States having snow on Christmas based on information from the National Climatic Data Center (NCDC). More maps and tables about predicted snow level conditions are here. 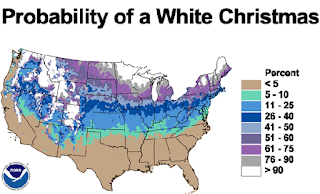 A World of Good Wishes at Christmastime

This feel good map dating from 1950 was created by the General Drafting Company and recently a scanned version was posted to Flickr by the American Geographical Society Library of UW Milwaukee.  The map is filled with Santas doing all kinds of activities including fleeing dinosaurs, hunting, fishing, skiing, and playing the piano.

A World of good wishes at Christmastime / General Drafting Co., Inc., 1950. Click on image for larger versions of this Christmas map. 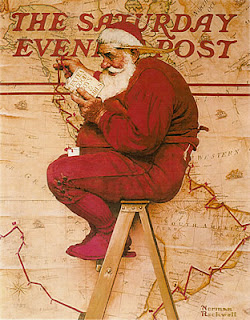