MapPad is MapCite's mobile reporting app which allows for field mapping and data gathering.  MapPad is part of MapCite's suite of ready-to-go geographic data collection and mapping focused solutions.
As mentioned in a previous article reviewing MapCite's Excel spreadsheet and web mapping offerings, MapCite's focus is to offer a reasonable cost of entry for companies looking extend their geographic capabilites beyond simply answering "where's my data?" MapPad is geared to get companies up and running with mobile field reporting and mapping capabilities with a local entry point for costs and development.
MapPad is a Windows Phone based mobile GIS application (MapCite is a Business Partner of Microsoft).  The mobile reporting app is now a native app instead of a browser based app.  Oliver Jones, head of MapCite's business development, stressed that although currently a small share of the market, the partnership of Nokia with Windows 8 is expected to result in a sharp uptick in adoption especially within the business community.  Windows 8 is expected to make its debut on October 26, 2012.  Within the European Union, Windows-based phone use had its biggest growth this past July.
Developed intially for Oil and Gas companies, MapCite's app can be used for any companies needing mobile field reporting.  For example, MapPad can used in the field for line walking in order to site dig locations. 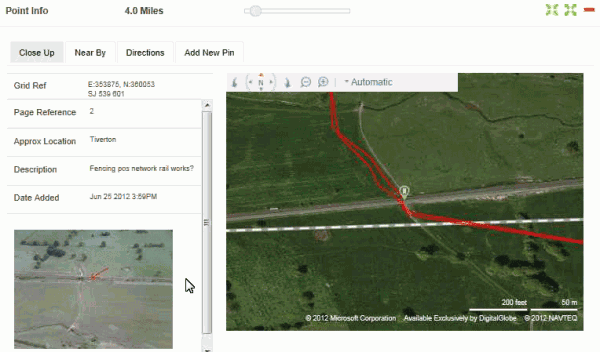 Photo taken out in the field can be geotagged.  Using the user's phone's triangulation with GPS, locations are logged with a accuracy of a few meters and geolocation works inside of buildings. Those photos can then be attached to the app's custom reporting capabilities where additional comments can be logged. 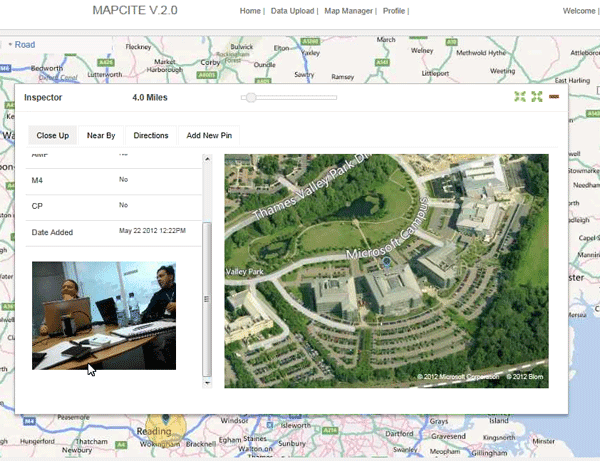 MapPad can also be used in an offline capability which is critical for areas where coverage is spotty or not available.  Reports, images, and geographic location information can then be synced once Internet connectivity is reestablished.
The app also allows for the real-time streaming of data back to the office.  This is a time-saving function.  For example, a staff member verifying a site can use the mobile mapping in the field to earmark areas of concern, capture a geotagged photo, and then have the data uploaded directly to the office, saving 24-36 hours in the report transfer time.  Previously, that same observer would have to take a picture with an SLR, create a written report separately, and then collating the two pieces of data back in the office into a database.  Since the data is consolidated via the Internet, this also means that different team members from around the world can access the same reports.
The latest MapPad update contains a new feature: the ability to generate an email to identified members of the team, indicating that new reports have been made. This particularly useful for speeding up the process, as it no longer requires team members to be monitoring the web application for new reports. The emails are customizable and can include the image, the precise coordinates of the report location, and description of the report. All of the information in the email notification is automatically generated directly from the report itself.
The latest update also allows for reports to be editable by other users, which can be particularly relevant when changing the status of the report or adding additional information.  This means the report can be tracked thru the various stages of being spotted, confirmed, work in progress to closed off – with this being a filtering option on the dataset within the web application.
I've spoken a few times with the developers at MapCite and they always seem to have a lot of new development in the works.  The latest offerings from MapCite include animated heatmaps and floorplan mapping.  A full listing with descriptions of some of the latest developments: www.mapcite.com/applications.aspx.
﻿
Postado por Unknown às 09:13